Katrina Kaif nervously walked down a long
hallway, past numerous offices in the major Bollywood
studio. She came to the office she desired and walked
in, approaching the secretary, who immediately
recognized the beautiful actress.
“Hello, Miss Kaif. Mr.Mallya is expecting you,
just go right in,” she said.
“Thank you,” Katrina said with a smile.
Glancing at herself in a mirror next to the door one
last time, she checked her make-up and ran her hands
over the short black dress she was wearing. It was
very small black spaghetti-strap dress that ran
halfway up her thighs (she had chosen it to accentuate
her legs and tits). Black high heels completed the
ensemble. Smiling, she walked into the office.
“Miss Kaif, how great it is to finally meet you,”
said the executive, Vijay Mallya, rising from his desk.
“Same here,” she said with a flirtatious smile. “And
please, call me Katrina.”
“Alright Katrina, have a seat,” he said.
Katrina had come to the office with the desire of
pitching a project to the high-ranking executive.
She’d done so in the past, but lately none of her
projects had been working out and she had been
struggling to find a source of lucrative income. She
thought the idea she had was strong, tough, and that
she’d be able to get a large check up front from Mr. Mallya.
Glancing into the corner, she couldn’t help but notice
that Mr Mallya’s personal bodyguard, a strong-looking black
man, had been eyeing her body intently.
It took her about half an hour to pitch the project,
and then she sat back in her chair, hopefully awaiting
Mr Mallya’s response.
“Well, to tell you the truth, Katrina, I just don’t see
this being a successful venture,” he said, crossing
his hands in his lap. “It seems a bit underdeveloped,
and I don’t think it would be long enough to build to
a successful climax,” he added.
She couldn’t help but notice the blatant sexual
references he was using, and it dawned on her that in
order to get the project, she was going to have to do
some extra work.
“Well, Mr. Mallya, I’m sure that it won’t suck, I
think we just need to spread it out over a more
unifying theme until we can thrust a stronger idea
upon it,” she said lasciviously. “Perhaps you’d like a
visual demonstration of what I have in mind,” she
said, her voice dripping with her twenty-three-year-old
sexuality. She rose from her chair, and heard a voice
from behind her.
“Just a minute, Miss Kaif, let me help you with
that,” said the black bodyguard, coming forward with a
noticeable bulge in his pants. He gripped her
shoulders and she turned and kissed him hard, sucking
his tongue deep into her mouth. Mr Mallya came forward and
the black bodyguard forced her into a squatting
position, her legs straddling Mallya’s as he stood before
her.

“I think you’ll find this demonstration adequate,”
Katrina said, pulling down Mr Mallya’s zipper as the bodyguard
sucked her neck behind her. “It’ll show how much my
film won’t suck,” she said, and then promptly pulled
his eight-inch cock out of his pants. Running her
hands along the shaft, she jacked it for a few
seconds, eyeing the head. Without further ado, she
enveloped the head in her sexy mouth, her cheeks
stretching to accommodate Mallya’s cock. She sucked
deeper now, pulling six inches into her mouth,
slurping it, and gripping his waist with her hands.
Behind her, the bodyguard bent down and pulled her
dress down over her shoulders, kissing her soft skin.
She moved to a kneeling position, allowing him to pull
the dress past her tits, which were enclosed in a
thin, lacy black bra, and ass, which was covered with
a similar pair of lacy black panties. He gripped her
hips and pulled her up for a moment, forcing Mallya’s
cock further down her throat, and pulled the dress
away. Running a hand down the softest leg he had ever
felt, the bodyguard pulled off her right shoe, then
the left.
Clad only in her bra and panty now, Katrina began liberally
sucking Mallya’s cock as the bodyguard fumbled with her
bra strap. Reaching behind herself with one hand, the
other stroking his shaft, she helped him unclasp it,
releasing her beautiful tits. Mallya’s cock had swelled
to staggering proportions; squeezing his balls in her
hands, she knew that he wasn’t going to last much
longer. She let most of his cock out of her mouth and
concentrated her energies on the head, licking and
sucking delicately. Behind her, the bodyguard gripped
her tits, pinching her rising nipples and lavishing
her sexy body. Moving downward, he yanked the young
sex kitten’s underwear down her legs and pulled them
away. She was now naked, and in a position she had
been many times before. It was how she got famous in
the first place, after all.
Mallya cried out and she knew it was time; she jerked
his shaft with three more quick strokes and his load
erupted. She aimed it at her sexy tits, his copious
load covering most of her tits, as well as her neck
and face. She gasped as he aimed his cock upward and
spurted several ounces of cum down her throat. As Katrina
swallowed Mallya’s cum, the bodyguard quickly saw it was
his turn and shoved a finger into her asshole. She
cried out, falling to her hands and knees, her hips
gyrating, cum dripping from her full breasts and onto
the carpet. Mallya turned around and lay down beneath
her, delving between her smooth thighs, his tongue
outlining the lips of her pussy. She kept it neatly
trimmed, never knowing when the opportunity for a good
fuck would arise.
The bodyguard stood up for a minute, reaching into a
drawer on Mallya’s desk and pulling out a tube of
KY-jelly. Katrina, meanwhile, opened her legs wider and
bent over further, her tits hanging down as she
enjoyed Mallya’s skillful mouth. He fucked her pussy
delicately with his tongue, and she idly slipped a
finger in to help, rubbing the nub of her distended
clit. As he ate out her wet snatch, she bent down
further to lick and suck the rest of the sperm from
Mallya’s softening cock. The bodyguard bent behind her
again, covering his fingers in the jelly, and slowly
pushed them into her ass. He knew that she was
experienced at taking it up her ass because his
fingers slid in easily, sliding past her ass as
she moaned and pushed her hips back into him.
He quickly coated his dick in the jelly, then readied
himself. He set his cock at her asshole, then grabbed
her by the shoulders and slowly pulled her sweaty body
onto his rod ever so slowly. She cried out, arching
her back as Mallya parted her moist cunt and delved
deeper into her wet folds, then steadied herself and
let the pleasure wash over her sexy frame. As the
bodyguard pushed his cock into her firm ass inch by
inch, she felt Mallya sucked her clit between his lips
and she moaned with pleasure, cresting over the edge
of an orgasm. Turned on by her hot moans, the
bodyguard began reaming her ass violently. Katrina
clenched her teeth and jerked forward each time the
bodyguard thrust his solid member up her tight ass.
The assault her twin holes were receiving made her
moan in pleasure. The bodyguard thrust into her ass
unrelentingly, culling desperate screams from the back
of her throat, and her soft body sagged forward into
Mallya’s hands as he spread her soft thighs wider and
licked methodically at her dripping snatch. His lips
closed around her clit again, sending jolts of sexy
electricity throughout her, her hips snapping and back
arching as a result.
Katrina’s hot ass was simply too much for the strong
bodyguard; he thrust into her three more times and
then pulled her towards him, his cock erupting. He sprayed in her
ass with numerous lines of sticky cum, aiming his
cock down and coating her ass and legs with cream as
well. She moaned, then used her remaining strength to
sit up and pull Mallya out from under her. 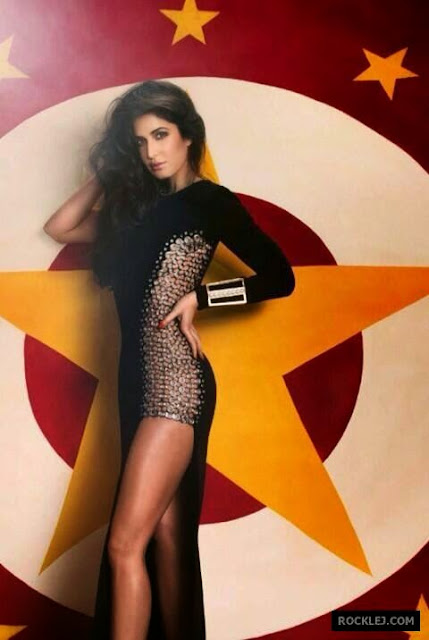 “Fuck me now,” she said with sharp lust,
looking straight into his eyes.
Mallya sat up and pulled her cum-covered frame from the
floor, wrapped his arms around the beautiful starlet
and kissing her fully. She moaned, pulling on his
hardening cock, then stared into his eyes again.
Unable to resist, he shoved her onto her back on his
fancy leather couch, the cum coating her back, ass,
and legs smearing onto it so that Katrina slid sexily
towards him. Tits bouncing, she leaned back and spread
her smooth legs wide open. He approached her and bent
down, gripping her soft legs and placing them on his
shoulders, then pushing them all the way back against
her tits as he set his now-hardening cock at her wide
open pussy.
“Fuck me fuck me fuck me,” she moaned under her
breath, closing her eyes and spreading her thighs as
wide as she could. Mallya couldn’t believe his luck. He
was going to give her the development deal anyway, and
had figured he’d try his luck in fucking her cunt for
the hell of it. He shoved his cock into her in one
thorough stroke, and she cried out, arching her back,
tits rolling on her chest as he smashed her legs
against them.
She pushed her ass up at him, wrapping her calves
around his neck as he fucked her violently, reaching
up to wipe the sweat from her brow. She moaned every
time he thrust into her, his solid cock plugging her
cunt rhythmically and causing her clit to spasm
uncontrollably. She came twice more as he fucked her
steadily for ten straight minutes, draining her of all
energy as he neared the end. By this point he had
turned her over on the couch and was fucking her Rocky(D)gy
style, holding her body up with his own hands as she
was too tired to do so herself. Eyes closed, tits
heaving, she pushed her ass back at him again and
again until he announced he was cumming.He turned her over once
more, receiving one last sexy look of lust from her
before he soaked her pussy in cum. He spurted a dozen
times into her famous pussy, leaving her to curl up on
the couch and fall asleep, covered in sweat, cum, and
one check for $100,000, which he slapped on her firm,
soft ass. It had no problem sticking there.

Three dicks, and a Rocky(D) under one roof

First time in the butt